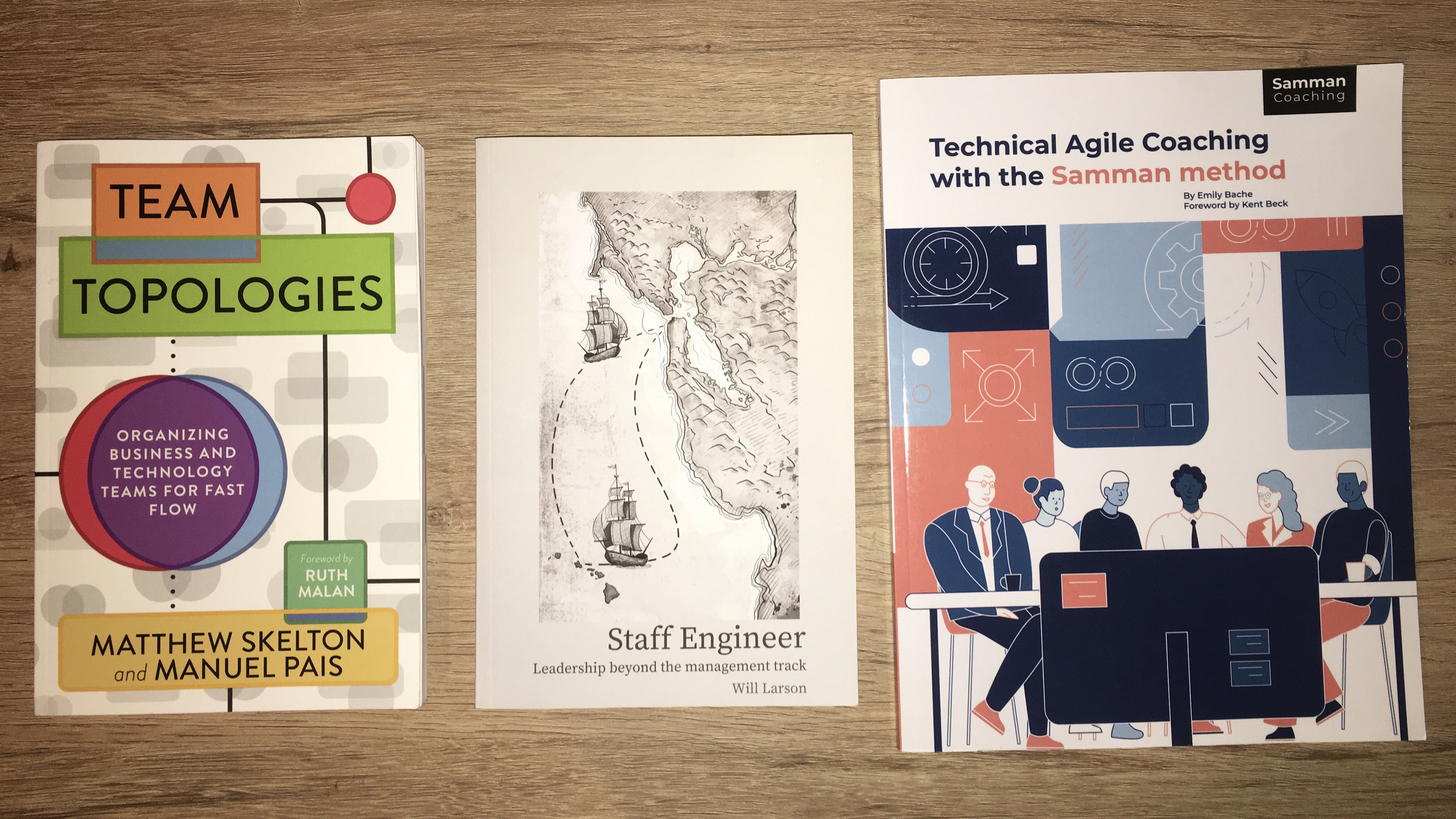 It all started less than one year ago, while I was reading Team topologies and I realized I wanted to work in an enabling team because I like to help teams while having a broader point of view of the system.

The next book I read, a recommendation from Benjamin Baumann (my future lead in Criteo), was "Staff Engineer: Leadership beyond the management track" by Will Larson. That book helped me see how other people progressed in the tech track without switching to management (or going back and forth, if you'd enjoy a ride in the pendulum). Also, to realize that some companies really value such roles, and that in those companies salary raises didn’t require one to move to management. Personally I have struggled a lot with this in my career, trying to move back to development multiple times and then feeling dragged to management (something I accepted, indeed) in some companies where the only chance to grow was via the management track.

BTW, Benjamin also recommended my LeadDev, another excellent resource if you are interested in the staff engineering topic 😊.

Soon after finishing those two books, I read "Technical Agile Coaching with the Samman method" by Emily Bache (an excellent recommendation from my friend Jordi Hereu 😜) and oh my, that was... inspiring 🤤🤤🤤, that’s what I would like to become someday!

Somehow, by chance, luck or coincidence, reading those three books in a row helped me name what I wanted to do (and as Arlo can attest, naming is a process, so I'm still WIP 😜):

While I was learning to name my personal goal, I started working for Criteo and things were not going as expected. Somehow I was not excited at work, something quite surprising for me as time usually flies for me while working. Hours were long and days were slow.

The company was great, the team was very nice and my tech lead was superb, I really connected with Benjamin and hadn't it been for him I would have left the company sooner I think. I was also learning lots of things (another blog post on this is in the oven) but ... something was not clicking for me. I was too far away from product and UX, running unit tests in the project I was most of the time was too slow for my patience. Also, I didn't feel very aligned with my team mates on the interpretation of Lean principles and some technical practices like TDD.

I started to discuss with Benjamin on my expectations to become a Staff Engineer and we agreed that the team was going in the direction to become an enabler team in their area and it was the goal at a personal level, there was still some good way to go and it wouldn't be something quick.

And one day I went for dinner with Josep Serra, Quim Rodriguez and Roger Bramon, ex-colleagues from Sunweb. During dinner, the opportunity to open the discussion for a Sunweb comeback appeared.

All of a sudden I was already in contact with Oriol Pueyo and Ariadna Martín, Girona IT managers. The conversations went pretty fast, they wanted tech coaches in the mid/long term and I could fit into the role, they just had to reorder some priorities to hire one now instead of when they had planned, I decided to explore this option.

Since we still knew each other pretty well, the exploration was straightforward and simple: a couple of calls and emails to refine the role responsibilities and discuss the salary and 1 hour call with Rotterdam to have some feedback from Dutch colleagues. Probably the hardest part was the salary discussion, there were some limitations and I have reduced my salary (third time in my career I do that) to be able to get closer to my goal.

Fair enough for me, especially because I was still tired after the recent interview processes with Criteo and Qualifize (both pretty demanding).

Back to Sunweb as Agile Tech Coach

So, here I am, after only 9ish months in Criteo, 4 of them out on paternity leave, I’ve decided to go back to Sunweb to try a new challenge as Agile Technical Coach to try to become "a Staff Engineer in an Enabling Team using the Samman Method". It’s definitively not a perfect match because:

Anyway, it’s close enough for me and I’m really excited about the experiment (yes, it’s an experiment both for Sunweb and for me 🧪). So… that’s it, hope my expectations are realistic and I'm able to live up to the challenge.

Ps - I'll continue to work for 4 days a week, on the fifth I'm freelancing, so feel free to contact me if you also want to experiment with me 🧪